Oh Child of Mine


My 8 year old nephew comes bouncing outside with a bang of the screen door to where I sit in the heat watching our two cats roll luxuriously in the sun. He has been inside, in our office, changing to go on a shopping trip with Gramma as Target failed to send his birthday gift in a timely manner and now the hunt is on to find it in a store--any store. From tears to excitement in 2 seconds flat!

"Hey, Mary! I just saw a picture of you with your child!"

My heart skips I beat. I know exactly what picture he's talking about--one that no one seems to notice or comment on. But I pretend to misunderstand him and reply, "You mean the picture of me as a child?" Interesting how he used the words "your child" my mind muses in a second's time span.

"No, no! The one of you with your child. You're holding him in your arms and you're both smiling!" My heart feels pierced by an arrow and a lump forms in my throat and I'm glad my transition lenses are now dark so he can't see my eyes--but my lips form a smile.

"I didn't know you had a kid...where is he?" Van asks innocently but seriously.

How to respond to an newly-turned-eight-year-old?

"Well...actually...hmmmm.... Yes, his name is Ovideo and he lives in a country far from here called Romania. He's what is called an orphan--he had no parents, well, actually he had parents but they had too many children to take care of because...well, never mind about that, so they made him, ummm, ok never mind, he didn't have parents..." (Van's eyes are now really wide & he's not interrupting me.) "...so he had to live on the streets and in tunnels under ground."... (damn this lump in my throat!) ..."but then this wonderful lady from America found him and brought him to this home she started, The Place of Hope"...(actually City of Hope, but I didn't want him to think it was a whole city rather than the building it actually was at the time)..."and he got to live there and was very happy there."

"When I was 26 years old I went there during summer to help work with the kids who lived in The Place of Hope and one of them was Ovideo. Even though he only looks like he was maybe 7 years old in that picture he was actually 10 years old. And we did fall in love with each other. I love him just as much as if he were my own child--as much as I love you. And he loved me too and called me mommy."

Van has sat speechless while I told him the story. And I, amazingly, have managed not to cry. But I knew it was coming:  the question. Yup, he asked it: "So where is he? How come he doesn't live with you?"

I sigh. "Well, Van, I really, really wanted him to come live with me--more than anything."

"Well, he couldn't. I couldn't stay in Romania"...(once more the accusing voice in my head says you could have tried)..."and I wasn't allowed to bring him home with me. Romania and the United States didn't just let you do that no matter how much you loved each other." ...(especially if you're young & broke)..."and you see, Ovideo also had a little brother who was 6 years old, who also lived at The Place of Hope, his name was Sebastian, but we called him Sebi..."

(Side note: six years old was the "magic" age when their father kicked one of their many children out of their house--per Romania's former dictator's rule all families must have as many children as possible and if you couldn't take care of them, don't worry, the government would in these "beautiful" orphanages--that were hideous. When Ceauşescu was overthrown, the orphanages fell apart and/or children ran away from them. In the  meantime families were "stuck" with the many offspring Ceauşescu had demanded of them, many of whom were thrown out on the street, thus the enormous amount of street children that the western world began hearing about in the early & mid-1990s. Ovideo's father had determined that his many kids could begin fending for themselves at the age of 6. When Angie, founder of City of Hope, found him, he had fended for himself for 3 years. Angie managed to find his mother, so when his little brother turned 6, she told Sebi where to hide when his father turned him out. That night she secretly brought him to Orasul Sperantei so he never had to spend a night on the streets--never had to be raped, or prostituted to survive, was never exposed to all the lice and diseases [Ovideo had TB], never had to go hungry. And he was reunited with his brother.)

"...So you see, I would also have had to bring Sebi home with me too, which I would have loved to have done. But I wasn't allowed to...but I kept track of them both for as long as I could. Do you know that Ovideo would be 25 or 26 years old now? Isn't that crazy?!"

Van is quiet for moment. "Oh...that's kinda sad." Then he hops up and runs inside when Gramma calls and happily goes off with her in search of his (late) birthday present.

I listen to the garage door slam, followed by the big garage door opening and closing as they drive away. And all the tears I've held back while talking to Van suddenly start to flow. I gulp and begin to sob.

People said I'd forget...that I'd get "over it." People were wrong. I've never forgotten. I've never gotten over it. My heart is still broken and I keep that part of it locked away. I never speak of this little boy who is now a man the age I was when I met him. The pictures from my time in Romania are all packed away because it hurts me to look at them. Only one remains out: the one no one ever comments on or ever even seems to notice. The one my observant nephew saw today.

One of the happiest days of my life. The first day I was ever called Mommy. Someone snapped that picture at about that same time. A picture that I usually view through a blur of tears. 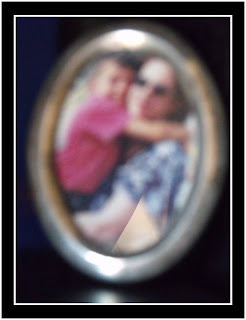 It turned out that Ovideo, who stole & broke my heart was the only child to ever call me Mommy. I was never able to adopt him. When we had to part it was seriously like a scene out of Not Without My Child. People pulling us apart. Those taking him back to  Orasul Sperantei  and those pulling me away to go to the airport.

Ovideo grew up happy at City of Hope. I grew older, worked, never met a man who was marriage or father material. Around the time I was thinking of in vitro fertilization (IVF), I got sick. I learned from my neurologist that getting pregnant could "kill me." Kind-hearted people said, "You could always adopt." Now I know it's a good thing I hadn't done IVF right before I got sick or adopt, as I'm often not well enough to care for myself on my own, let alone a child. (But it still took me several years of counseling to be okay with the whole thing.)

I absolutely love being an aunt--it brings me untold happiness. It practically fills to the brim that empty space inside of me that longs for children. My nieces & nephews bring me endless joy and delight. I cannot get enough of them!

But, in my secret heart of hearts, I remember my little boy, who lit up my life by filling my arms for a brief time, and brought me secret joy and tears for the remainder, the one who called me Mommy. 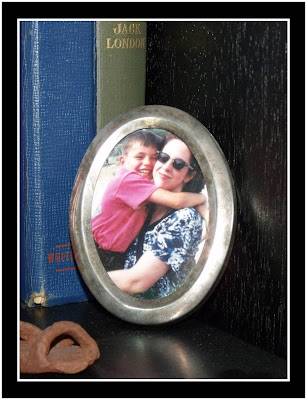 Thank you, Van, for noticing him. And for asking about him--and listening to my answer. You're a pretty special kid yourself!

Labels: Child of Mine, City of Hope, grief, Romania, VnK 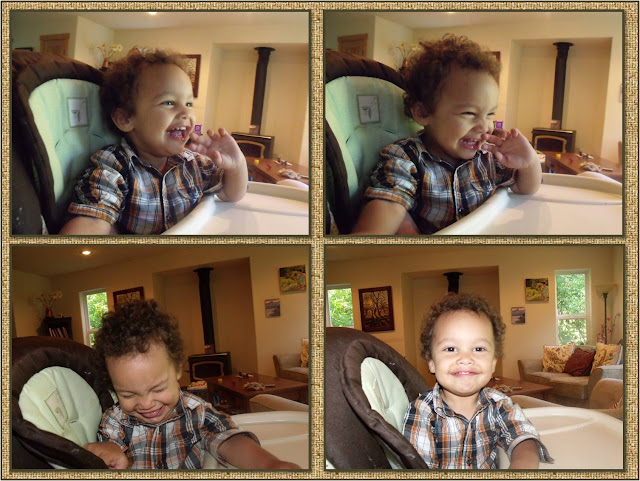 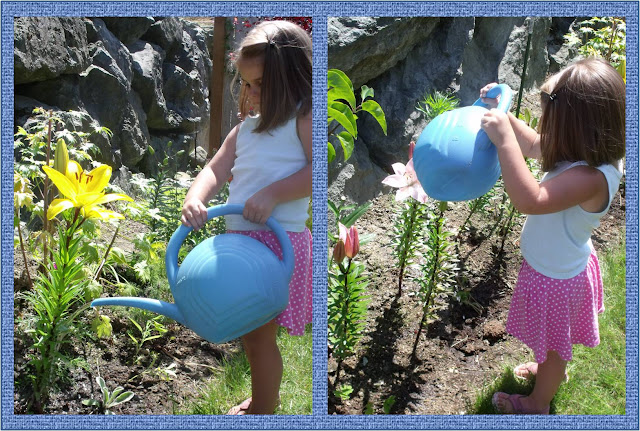 These two melt my heart & fill it with happiness & joy...and such gratitude: how very blessed am I!
Posted by Auntie M at 11:10 PM No comments:

Last weekend we had our first official sleep over of the summer with Van, Kenyan, and Teagan. That first afternoon/evening we had a hospital with doctors & nurses upstairs, a cafe & restaurant downstairs, princesses & cowboys, pattern blocks were played with, a pizza picnic party, played with Auntie M's CPAP machine (or "Puffer" as Teagan calls it), watched & danced to the songs from Mary Poppins (Teagan's pick), watched the Polar Express (Van's pick), the kids took turns taking looooooong bubble baths in Gramma's deep tub, and finally kids were in PJs and snuggled in to various beds in Gramma's big room & watched narrated "movies" of 4 or 5 of Eric Carle's books before everyone (including Gramma) passed out into a deep sleep while Auntie M went around the house turning off lights before turning in herself! All of this was crammed into the hours between about 4:30 and 10:30!!! 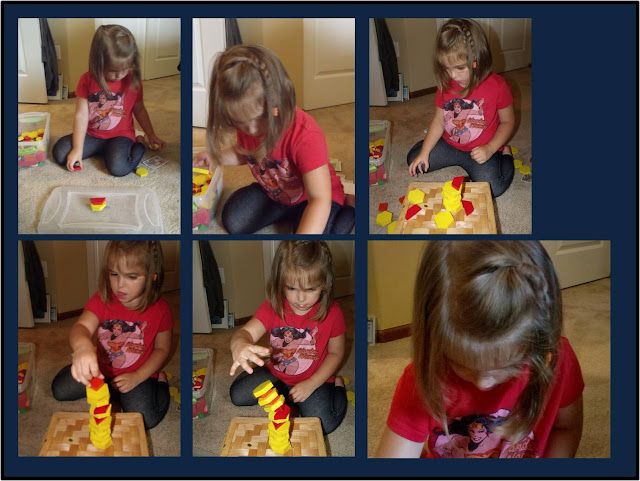 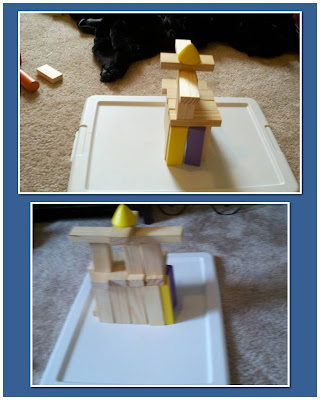 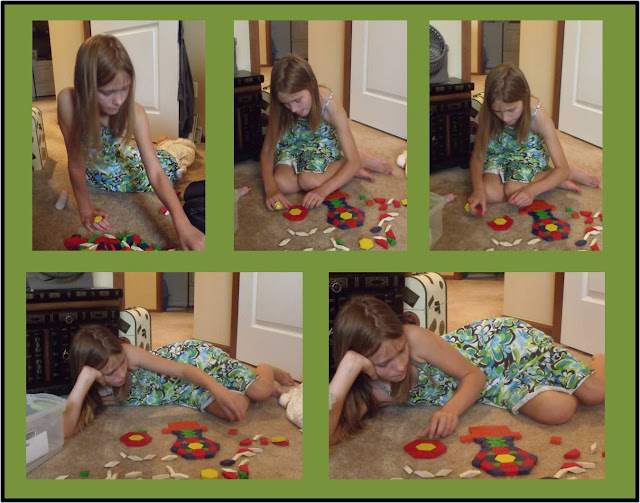 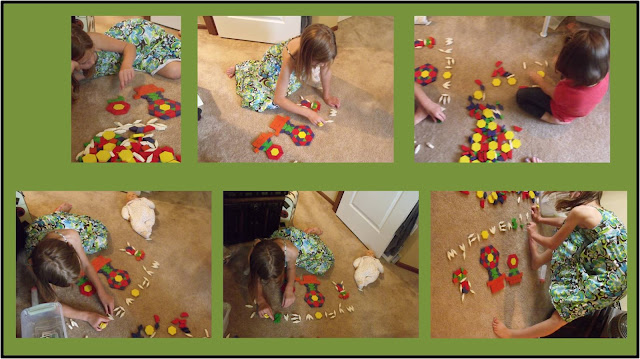 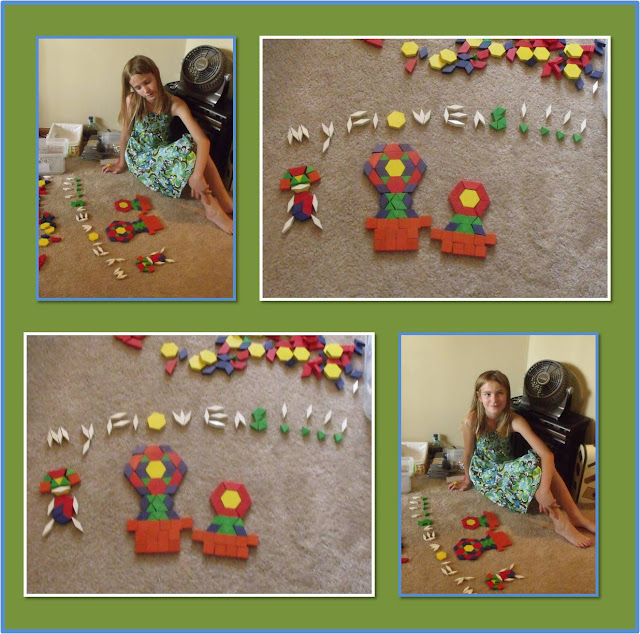 In the morning there was more doctors and nurses and restaurant staff running about before and after  a breakfast of pancakes (with syrup & whipped cream) & bacon & sausage & hot chocolate--with Kenyan's choice of Lady & the Tramp playing.  After eating Kenyan and Gramma curled up and watched the end of the movie (Gramma's favorite) while Teagan & Van teamed up to cure all the ills afflicted our stuffed animals. 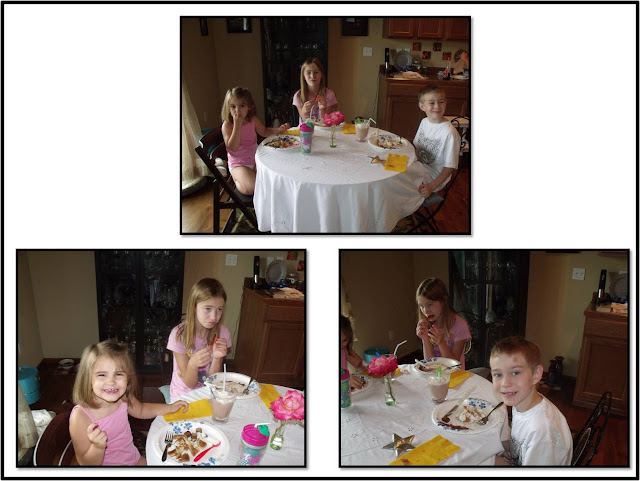 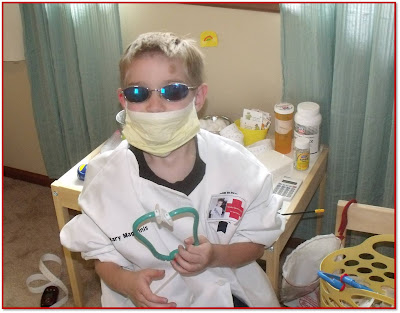 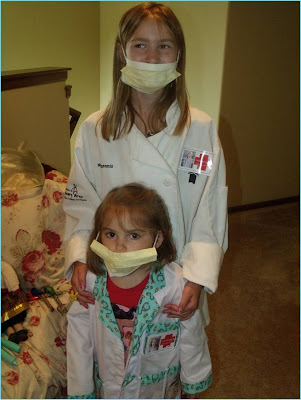 Later the girls once more became princesses...but Van, ahhhh Van! He be came: Johnny Cash, the Man in Black! It was awesome! 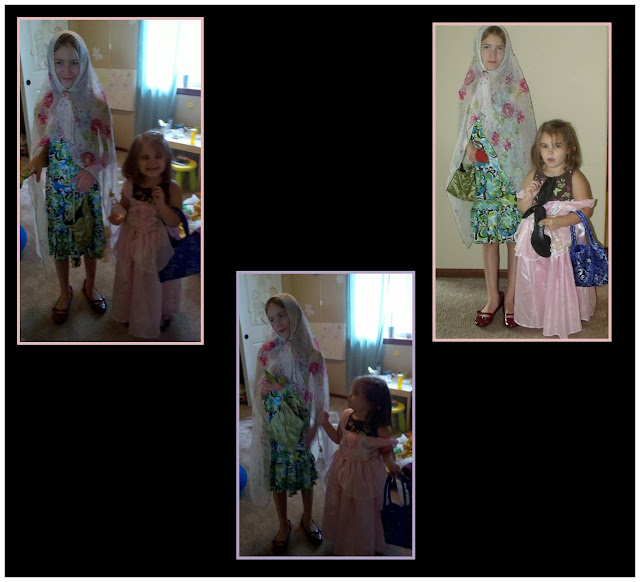 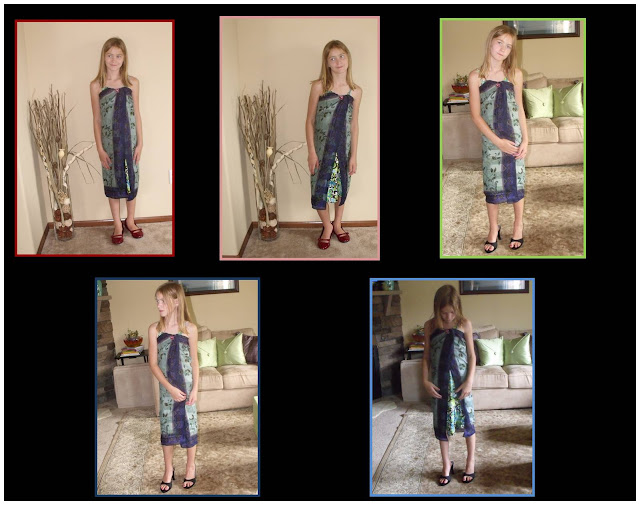 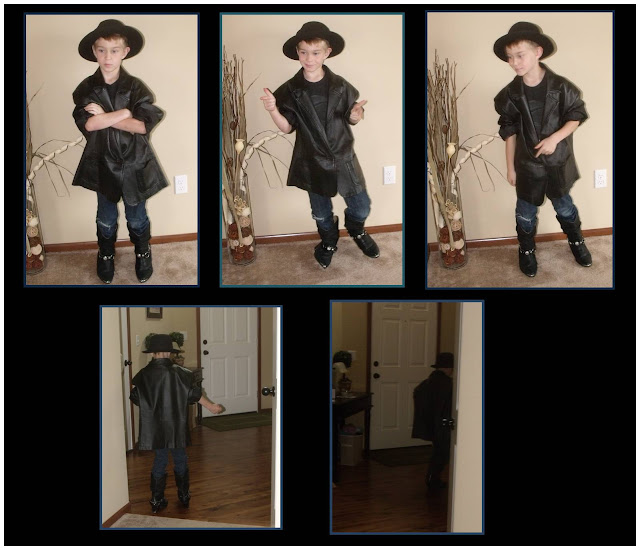 The best part was when I put music on and Van Johnny swept off his hat and asked Princess Kenyan to dance! 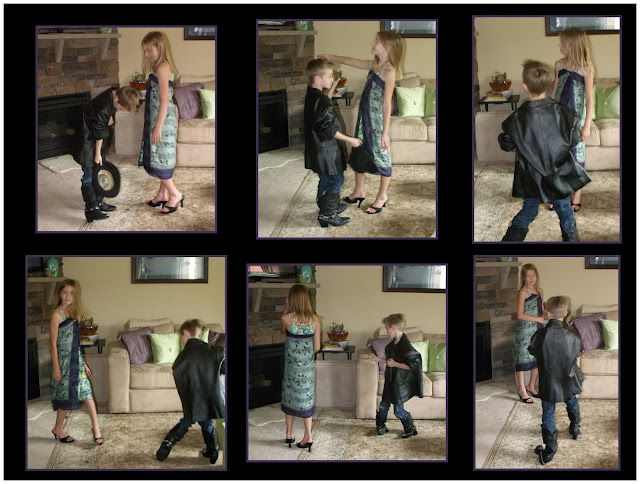 Oh did they dance! (Notice Kenyan's 3 inch heels! You know they're growing up when they show up to a sleep over with 2--count them--2!!! pairs of high heeled shoes!! She is 9-going-on-10-going-on-20 apparently!)

And on that note: it is officially July 7th!!! Happy 8th Birthday to our little man in Black:
the one and only Van!!!!!

And as of July 12th, Kenyan hits double digits and turns 10!!!
A Happy Birthday to Kenyan too!!!